The History of the Stethoscope

The stethoscope medical symbol evolved from a paper tube to an AI-powered cardiovascular screening device. 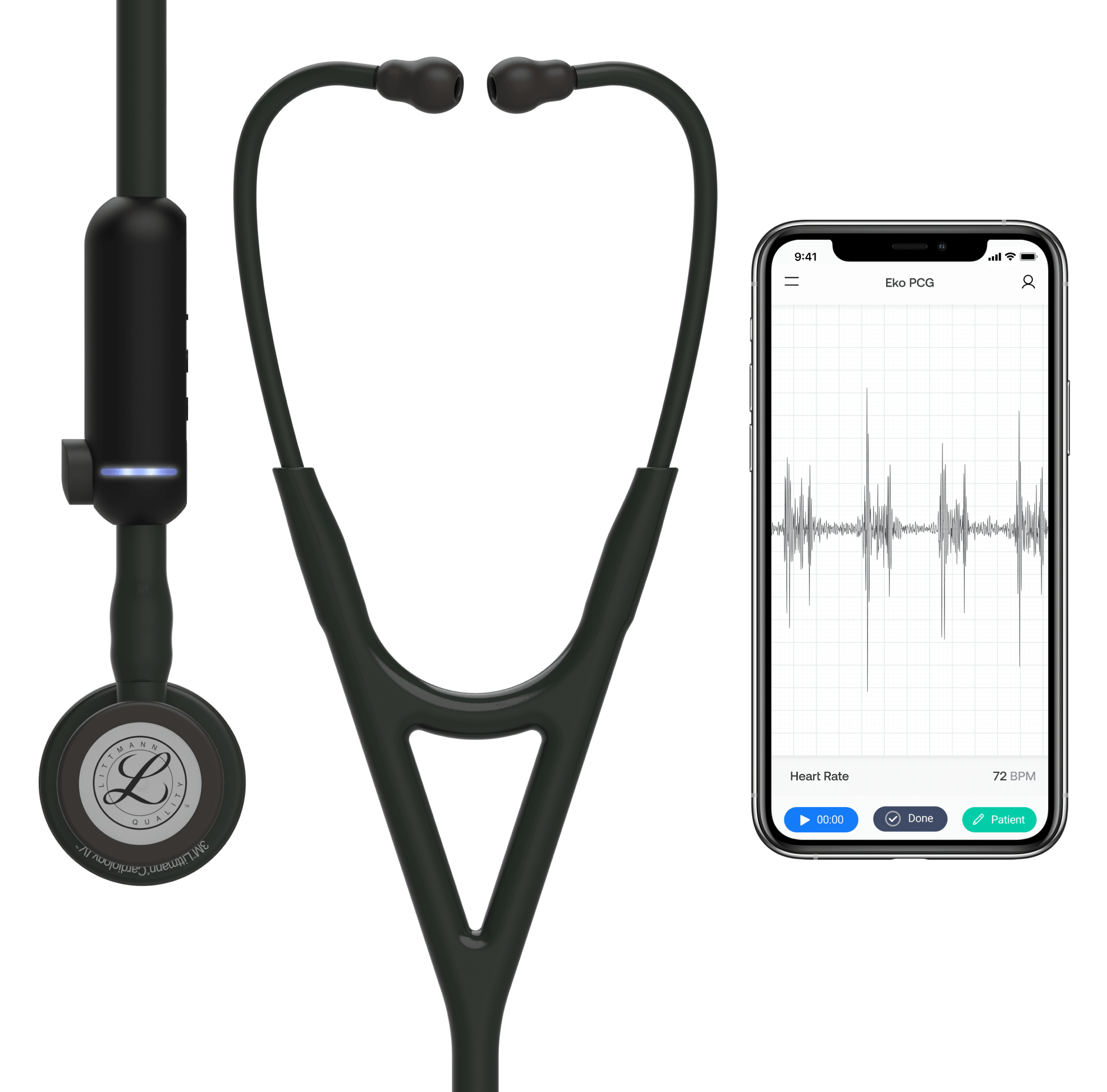 The stethoscope is a standardized examination tool in healthcare and a symbol of the medical profession. Whether conducting an annual checkup or a specialized treatment, the stethoscope plays a critical role in a clinician’s ability to assess, diagnose, and monitor patients. However, the time and tested stethoscope of the past is being upgraded with new technologies to improve provider confidence and patient outcomes.

Prior to the stethoscope’s invention, doctors placed their ears against patients’ chests to evaluate their health in a process called ‘immediate auscultation.’ This rudimentary method proved awkward for patient-clinician relationships, and In 1816, the French physician Rene Laennec conceived that a rolled piece of paper placed between the patient’s chest and his ear could amplify heart sounds without requiring physical contact. This initial development led Laennec to develop the first stethoscope device which was almost named the ‘cylinder’ due to its shape. Ultimately, Laennec settled on a stethoscope because ‘stetho’ means chest and ‘scope’ means viewing.

The first stethoscope was a hollow wooden monaural tube with a funnel at the end which was placed in a clinician’s ear in a process called ‘mediate auscultation’ since it provided a tool intermediate between the patient and clinician.

‍After Laennec’s death, physicians began perfecting his design by adding earpieces so that bodily (auscultation) sounds could be heard in both ears. In 1851, Arthur Leared developed the first binaural stethoscope, and a year later in 1852, George Phillip Cammann created a flexible, rubber stethoscope for commercial use that much resembles the one used today.

In the 1940s, Rappaport and Sprague modified the stethoscope further to create the two-sided chestpiece. With this design, one side was used for the respiratory system and the other was for the cardiovascular system. The model was heavy and short. It was also plagued by noise artifacts created when the two tubes rubbed together. It was later abandoned.

In the 1960s, Dr. David Littmann created a lighter stethoscope with a single tube, a tunable diaphragm and better acoustics which created the common diagnostic tool that we know today.

Stethoscopes are an undeniable symbol of healthcare professionals denoting trustworthiness and care. Here are some of the common types of stethoscopes:

The Future of Stethoscopes

The analog stethoscope has been a ubiquitous symbol of healthcare for over 200 years, but it is increasingly rarely used to its full potential. This is due to the substantial time required for proper training and the time required to maintain auscultation skills. As a result, this valuable diagnostic device, the stethoscope, has become underutilized. We concur with Dr. James Thomas, a cardiologist at Northwestern Medicine in Chicago when he said, “the old stethoscope is kind of falling on hard times in terms of rigorous training.” The final nail in this coffin came on January 27, 2021, when the USMLE exam component that requires medical students to learn physical examination skills was permanently discontinued. As a result of this discontinuation, even a minimum level of physical exam proficiency can no longer be assured.

A lack of auscultation training and proficiency is troubling. Several recent studies have already shown that graduates in internal medicine and emergency medicine may miss as many as half of murmurs using a stethoscope. Furthermore, a comparative test of medical students, residents, fellows, and attending physicians has shown that auscultation skills peak in the middle of fellowship and decline thereafter, with competency scores ranging from 64% for medical students to 81% for cardiology fellows to 65% for private practice internal medicine attending physicians.1

Added to this troubling situation is an incredible lack of evaluation time for providers. Today, more than 55% of primary healthcare providers spend less than 16 minutes with a patient, with 27% spending less than 12 minutes.2 It is simply not possible to conduct even a limited history assessment and physical examination in this short period while also discussing findings, the plan of care, and patients’ questions. Yet patients still need to be evaluated and treated. In order to meet this need, healthcare providers now shift the diagnostic burden from the physical exam to ordering tests like echocardiograms and x-rays.

Unfortunately, ordering tests like these increases the complexity of care, cost, and inefficiency, and it hinders the tremendous value that listening to body sounds in a physical examination provides. However, by leveraging new technology, providers can analyze patient sounds and make treatment decisions quickly, even from a distance. These technologies allow providers to spend a short amount of time capturing those signals after which they will be digitally evaluated with artificial intelligence. The result is a workflow that provides a faster, more accurate, and more consistent evaluation.

Digital stethoscopes are the future of stethoscopes and will change the landscape of the physical examination. Already, the first round of AI algorithms can detect patient abnormalities within seconds of sound and ECG capture. When AI detects arrhythmias, heart murmurs, bradycardia, and tachycardia within seconds, these outputs alert providers and puts patients on the proper path of care. Further, AI analysis does not stand in the way of additional investigations such as echocardiography and x-ray imaging when more detailed information is needed. Healthcare providers and patients who use these new digital AI-assisted stethoscopes will naturally prefer them; no analog acoustic stethoscope can compare.

Current models of digital stethoscopes capture sound and electrical signals (e.g. Eko DUO), and the first versions of AI-assistive algorithms work very well. However, in the future, the digital stethoscope will not be constrained by the historical model of what a stethoscope has been, merely a device used to hear heart and lung sounds.

The future of the stethoscope will be as an information-gathering device, constantly evolving to meet unmet clinical needs, limited only by technology and imagination.