10% Off
Labor Day Sale — Ends September 6th
Shop Now →
Thank you! Use code HOLIDAY on your next order for all stethoscopes.
Oops! Something went wrong while submitting the form.
Articles
/
Press Releases 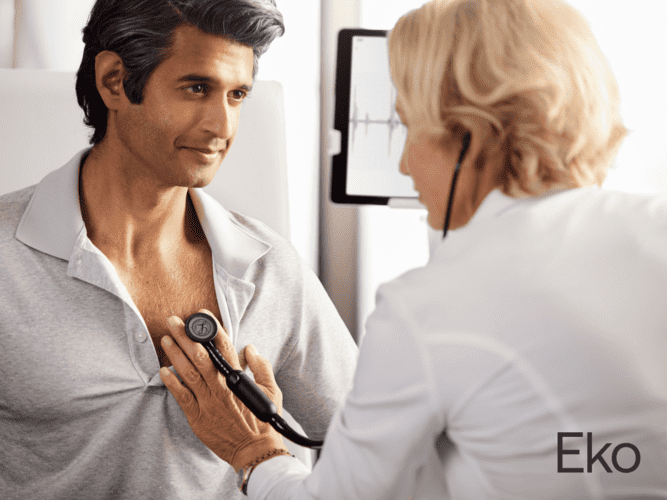 Eko, a digital health company advancing heart and lung disease detection, today announced that the U.S. Food and Drug Administration (FDA) has cleared its Eko Murmur Analysis Software (EMAS) for detecting and characterizing murmurs found in adults and pediatric patients. The next generation of Eko’s murmur detection capabilities grants Eko the first and only smart stethoscope on the market that can identify and differentiate, between innocent and structural, heart murmurs indicative of valvular heart disease.

Valvular heart disease is a life-threatening condition diagnosed in more than 8 million Americans(1) and is often first identified with a stethoscope. While early detection is critical, millions of patients are expected to be undiagnosed, with as much as 57% of clinically significant valvular heart disease missed(2). By combining murmur analysis AI with its digital stethoscopes, Eko has transformed the traditional stethoscope into an objective, low-cost, and scalable screening tool that can identify significant structural heart disease in seconds on the front lines of care.

“This latest FDA clearance is another way in which Eko is improving access to better heart health through clinically-validated algorithms and best-in-class medical devices,” said Connor Landgraf, Co-founder & CEO of Eko. “By making heart disease screening algorithms and digital stethoscopes accessible in exam rooms around the country, we are moving towards a future in which more objective and consistent valvular heart disease screening can become the standard of care.”

“Combining pathologic murmur detection with the stethoscope, a tool already deeply embedded in the practice of medicine, will allow for more accurate and efficient screening of heart valve disease in the community,” said Dr. Patrick McCarthy, Executive Director of the Bluhm Cardiovascular Institute at Northwestern Medicine. “Eko's platform will help uncover early valvular heart disease in millions of people worldwide who may otherwise be missed, and make a significant impact on our ability to treat patients with life-saving interventions.”

Eko Murmur Analysis Software (EMAS) is a cloud-based machine learning algorithm that analyzes heart sounds, phonocardiogram and ECG signals (when available), captured using Eko’s smart stethoscopes. The software uses several methods to interpret the acquired signals, including signal processing and convolutional neural networks. The database used in the training and testing of EMAS is one of the world's largest repositories of clinically validated heart sounds.

EMAS is FDA-cleared to automatically detect murmurs that may be present, and the murmur timing and character, including S1, S2, innocent heart murmurs, structural heart murmurs, and the absence of a heart murmur. The software is not intended as a sole means of diagnosis and is for use in environments where healthcare is provided by clinicians. The interpretations of heart sounds offered by the software are meant only to provide decision support to the clinician, who may use the result in conjunction with their own evaluation and clinical judgment. EMAS is intended for use on pediatric and adult patients.

Healthcare institutions interested in learning how they can use Eko to detect valvular heart disease can visit ekohealth.com/vhd.