By providing accessible screening and community education, Dr. Antoine Keller and his team work to close the heart healthcare gap in Louisiana. 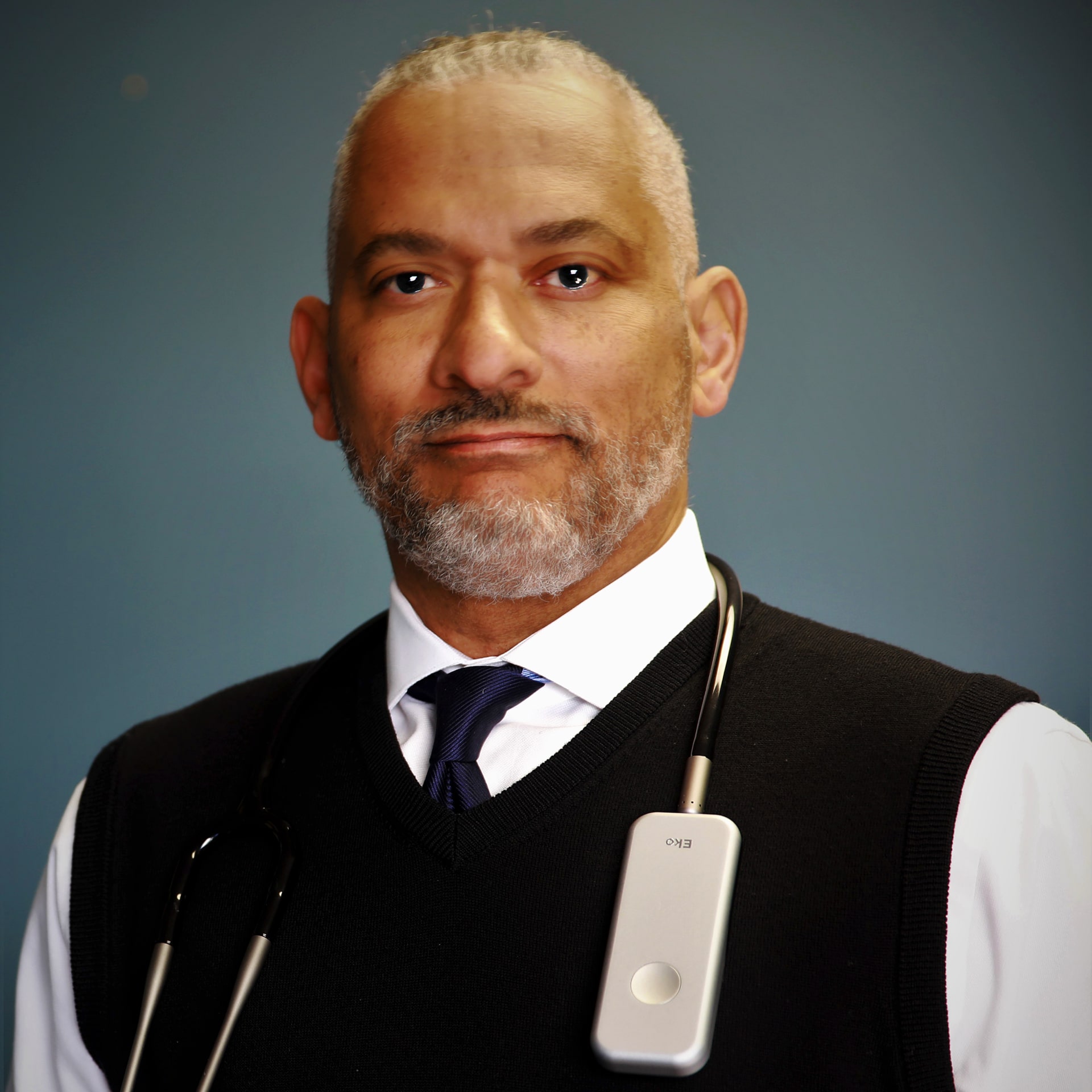 Dr. Antoine Keller is the driving force behind HeartSense, a new Louisiana non-profit with the goal of screening as many people as possible for heart issues and educating the community about warning signs. For Dr. Keller and his team, the motivation is simple: this is a matter of life and death.

“One of the things that has been most frustrating is that so many people die of cardiovascular disease before they even know they have it,” Keller said. “Many people aren’t treated medically because they're asymptomatic and then have sudden cardiac death or irreversible complications like heart failure. We want to make sure that we give people every opportunity to have a long, healthy life.”

According to Dr. Keller, who is a cardiac surgeon at Baton Rouge General, by fixing a patient’s aortic stenosis, you give them the same expectation of living a full, rich life than if they’d never had that heart problem at all. The challenge lies in reaching those in need of care.

“In some communities, upwards of 60 or 70 percent of those patients are not treated,” Keller said.

The Black community in Louisiana is particularly at risk. Factors like insurance, lack of continuous care, and lack of awareness all play a role in more people suffering and dying from treatable heart conditions. Heart-Sense is seeking to close the gap, in part by identifying the prevalence of valvular heart disease in the community.

“Our prevalence study is designed to go to places like barber shops and churches and pharmacies, and find people who might not necessarily go to the doctor. We want to give them access to a free screening and find out how many of these people in the population actually have valvular heart disease that we would never know about.”

Heart disease is a major public health issue that is likely to get worse in the near future. Dr. Keller explained that with the number of people over the age of 60 expected to triple in the next 30 years, the incidence of heart failure and valvular heart disease will spike too. The challenge of understanding which patients are most at risk is a pressing one. While wellness screenings for chronic conditions like hypertension, dyslipidemia, carotid artery disease and peripheral arterial disease exist, Keller noted that screening programs for valvular heart disease largely don’t exist.

“The older people get, the more likely they are to have these problems. We feel that valvular heart disease should be part of a wellness screening, especially now that we have amazing tools like the Eko DUO, portable tools that help you really accurately determine whether someone is going to be at high risk for having some kind of structural heart disease or not.”
‍

The Eko DUO in Action for Heart-Sense
‍

To count people where they live, shop, worship or work, Heart-Sense needs to be portable and flexible. Eko’s DUO fits the bill in that it is a one-lead ECG and a digital stethoscope in a single device smaller than the average phone.

“The most interesting thing about the device, I think, is that it is much better at picking up murmurs for valvular disease even than the Butterfly probe,” Keller said. He explained how the DUO is particularly helpful in screening overweight patients. “In Louisiana we have a lot of obesity and other probes are not very good at imaging through patients with large breasts or patients who have morbid obesity. The Eko DUO device works a lot better for that. I can diagnose patients with atrial fibrillation too.”

Eko recently added artificial intelligence analysis to its digital stethoscopes, alerting clinicians of heart murmurs and atrial fibrillation, and showing them a detailed waveform of the abnormality.

“The AI piece is really good and sensitive at picking up abnormal sounds and murmurs.

We are learning more and more from looking at the waveforms, how these different murmurs behave and what combinations of murmurs look like. But the most beneficial thing is the amplification of the heart sounds and also the visual representation of the murmur on the DUO software. It has been remarkable.”

Keller said he counts on the DUO more than any other probe when doing a prevalence exam.
‍

Next to his parents, Dr. Keller credits his high school biology teacher in Berkeley California for putting him on the path to medicine.

“Kim Penske was her name and I will never forget her because she is likely more responsible than anybody else, other than my parents, for me being a doctor,” Keller recalled.

Penske encouraged Keller to enter a research competition the California Medical Association organized to interest teens in science. Any high schooler in the Bay Area could write an essay and describe what they wanted to do with their lives as it related to science.

“I didn't know anything about research, but lo and behold, I won. Out of all the kids in the Bay Area, they chose me, as a junior in high school. That got me into the research lab and into the hospital and it was really a transformative experience.”

Keller went on to UCLA, where he worked in a neuromedical research lab and sat in on autopsies. After that, he accepted a scholarship to Duke University, which had just published a landmark study in the care of patients with cardiovascular disease.

“It accentuates how circumstances really do sometimes conspire in your favor,” Keller said. “During my time at Duke I did my research in a lab where I got to operate on dog hearts every other day for a year and a half. That really inspired me to want to be a surgeon, especially a cardiovascular surgeon.”

Keller has been reflecting on his formative years a lot recently because now his daughter is applying to medical school, following in his footsteps.

“She has been writing essays for her applications and in order to illustrate to her what kinds of things medical schools are looking for, I had to reiterate my story. For me, my parents certainly were an incredible influence. They put me in front of really dynamic people from a very early age.”

Those “really dynamic people” include Muhammad Ali, Jimmy Carter, civil rights activist Stokely Carmichael and countless other people of note. It all came about because Keller’s father moved the family to Kenya while completing his Ph.D. in Political Science, and then to Ethiopia.

“I met Carter here in the States through an organization that my father worked with. Meeting Muhammad Ali also evolved out of a relationship that my father had when we were in Africa. I spent an afternoon with him. He did magic tricks for me and my cousin. Idi Amin we met in Uganda. Stokely Carmichael and a number of other dignitaries were there. He was giving a speech in the pouring rain and there were thousands of people in a field listening. The stage did not have a cover and they kept trying to give him an umbrella and he would say, ‘No, if all of these people don't have umbrellas, I don’t need an umbrella either.’

Keller credits his early experiences in East Africa for developing his outlook on life.

“My memories have a lot to do with how well people did with so little as opposed to how we live in America now. Over the course of my life that has had a tremendous impact on me and what kinds of things I decided I wanted to do in my career.”

Reflecting back, the idea of impact is a big one. Surgeries, for instance, have a measurable impact on a person’s life.

“We see them get better almost immediately after the surgery. But I want to be able to have an impact not just in surgery.”

That is why Keller is so passionate about what Heart-Sense strives to do. He wants to tell people how significant heart murmurs are. He wants to encourage people to engage in their own wellness and the wellness of family members. And he wants these messages to spread and grow into a landslide of awareness, screenings, treatment and change.

“We want to educate the community on the hazards of ignoring these kinds of chronic conditions that we feel are really eminently important to keep track of. It’s why we are really grateful to companies like Eko because they have given us an opportunity to allow these people to have access to technologies that they would have never had access to before.”

Speaking of matters of access, the U.S. has a long way to go in reducing racial disparities when it comes to heart health. Recent research has revealed significant racial gaps in access to several common procedures, including aortic valve surgery and heart bypass surgery. Among Black people there were 17 more deaths per 1,000 patients who received aortic valve surgery and 8 more deaths for heart bypass surgery, according to the findings.

Dr. Keller is quick to point out that racial disparities begin long before a patient is even diagnosed. Programs like Heart-Sense are well versed in the many factors preventing people from getting the care they need. Perhaps that’s why the team was able to effectively pivot when confronted with yet another challenge: COVID-19.
‍‍

Heart-Sense launched just as the coronavirus threat was beginning to ramp up in the U.S. As the virus reached pandemic proportions, Dr. Keller’s team was forced to improvise.

“We had to be creative in how we were going to reach people. We went to pharmacies, we went to barber shops and hair salons and all of these places, and we gave people a flyer and asked them to call a number or write an email.”

Today, those calls and emails are coming in a steady stream. On the day we talked to Dr. Keller, he had already done 14 screenings.

“It has evolved into something a little bit different than it was meant to be in the beginning, but we are having pretty good success.”

Keller is looking forward to emerging from COVID restrictions and hosting mass screening events. It’s not the only way he has his eye on the future. As the newest member of the Diversity and Inclusion Committee for the American College of Cardiology, he’ll be working to help increase the number of people from diverse backgrounds who can go out into communities and talk about cardiovascular disease.

“One of the things that I am most interested in is trying to figure out is how our diversity and inclusion committee can reach out to kids in high school and college before they become doctors to encourage them to be cardiovascular physicians. Because of my own experience, I realize how impressionable kids are and how they are really inspired by dynamic people who can appeal to their sense of curiosity.”

From the whole team at Eko, hats off to Dr. Keller for his remarkable endeavors and leadership as we celebrate Black History Month.