An Interview with Rafael Grossmann

Healthcare futurist, Rafael Grossmann, discusses his Eko workflow and where telehealth is heading. 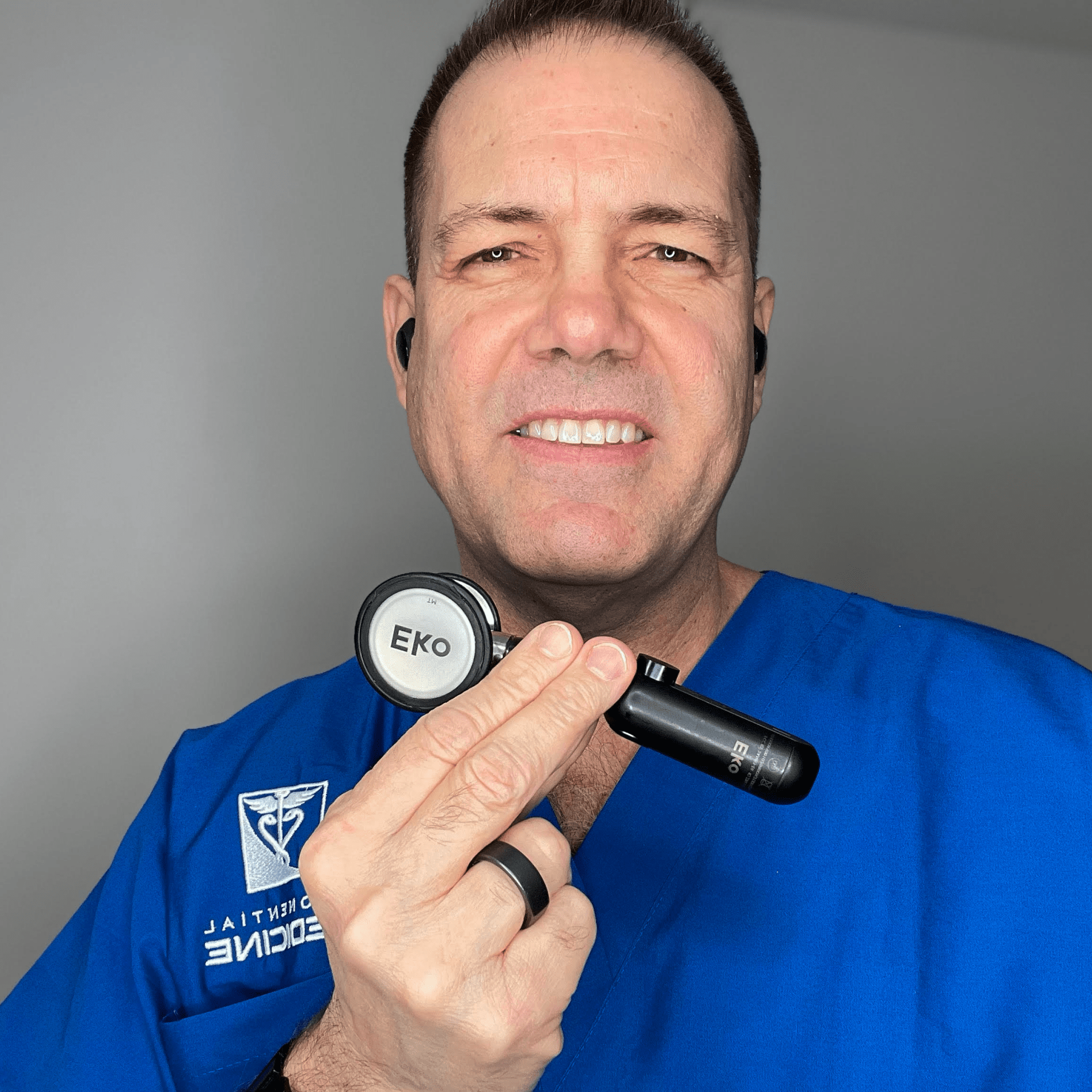 Surgeon, educator and innovator Rafael Grossmann is hailed as a “healthcare futurist” by many in the both tech world and the healthcare world. For nearly two decades, he has been on the cutting edge of adapting the latest technological gadgets and software to medicine. Grossmann was the first doctor to use Google Glass during live surgery back in 2013, and among the first to recognize FaceTime as a gateway to telehealth. He was also one of the first clinicians to go through Singularity University’s week-long program in Exponential Medicine, exploring how breakthrough new technologies could converge with medicine to make an impact in healthcare. It just so happens that Eko co-founder, Connor Landgraf, was at the Exponential Medicine conference too, debuting an early prototype of the company’s flagship digital stethoscope.

“I thought, ‘this is great,’” Grossmann recalled. “The stethoscope is something that hasn't changed in decades, hundreds of years maybe. I started using the Eko stethoscope and got hooked. Then it started getting better and better, to what Eko is now, which is radically good.”

Grossmann has so many Eko products from over the years, the devices would fill a tabletop, he said, essentially showing the evolution from Eko’s first digital stethoscope to the new CORE and DUO. Today, under the stress of COVID-19 exposure for both clinicians and patients, Grossmann especially appreciates Eko’s wireless capabilities.

“When I got the Eko CORE, it was just heaven because I didn’t have to be physically attached to the patient with tubing. I could connect instantaneously and seamlessly, have a better listening experience and better analysis in my head. The Eko AI analysis is also good for detecting murmurs. I always like to see the phonocardiogram on my phone because I can show my students the difference between one sound and the other. Even if they're not listening to it, they can see that difference.”

Another important aspect is being able to see and hear in the middle of chaos. Grossmann is a trauma and critical care surgeon, often working in high-stakes, loud conditions.

“In the trauma bay you're busy, everyone is agitated, and you’re trying to bring the volume down. Things are happening quickly as everyone is trying to save someone’s life. To have a better listening experience, and also to be able to see what you're listening to, that is key,” he said.

Originally from Venezuela, medicine runs in Grossmann’s blood. His great-grandfather, grandfather and father were all surgeons. It’s not surprising that Grossmann ended up in the operating room as well. Throughout his career, from medical school in Venezuela to Chicago, Ann Arbor, and finally Bangor, Maine, technology was always a passion.

“I grew up in the age of black and white TVs and watched the evolution to what we have now: holographic TVs. Over the last fifteen years or so I’ve been working to show how technology that amazes us and entertains us can be used to augment and enhance how we practice medicine, teach medicine, and change people’s lives.”

The tech world is full of examples of these potential crossovers, Grossmann explained. Take Apple AirPods, which were made to listen to music. Or FaceTime, which was marketed not just as a way to talk to people, but a way to stream events and connect in unlikely ways. When Grossmann sees new technologies, his mind jumps to medical applications.

“Why not use FaceTime to save someone’s life instead?” he asked. “You could do an acute trauma consultation. Or you could use the video component to guide someone to do a life-saving maneuver 100 miles from where you are.”

The impulse to extrapolate to the doctor’s office, the operating room, the medical student classroom, comes as second nature to Grossmann. It’s his hope that one day, it also occurs to Silicon Valley innovators.

“These technologies are being developed and used for everything except healthcare,” said Grossmann. “Take Google Glass. It was created for taking pictures of what you were doing live and streaming your point of view to the world. But I thought, well, it would be great to show the perspective of what I'm doing to students.”

Instead of students being stuck behind him, or off to the side, trying to study an important surgery, Glass could allow them to see through Grossmann’s eyes.

“I didn't really have to do any major set up. I just had the idea and used it simply and intuitively,” Grossmann explained. “That's the perfect example of how some technologies can be used to change how we care for patients.”

The first surgery with Glass is perhaps what Grossmann is best known for, along with his use of FaceTime for telehealth back in 2011 with the iPhone 4, when virtual care wasn’t on most providers’ radars. His innovative way of thinking led to awards, press coverage, and a series of TED Talks. Soon, clinicians and administrators from across the country were traveling to Maine to see how the telehealth program Grossmann helped to build from scratch worked.

But then came the barriers, including pushback from hospital administration, privacy concerns, and reimbursement rate challenges. The program largely disappeared. Last year, Grossmann was part of a new push to get telemedicine back up and running when the pandemic hit

“In one week, everyone saw telemedicine as a panacea, the answer from the gods, and suddenly the whole world is doing telemedicine,” Grossmann said.

While he is thrilled that telemedicine is being embraced like never before, he’s also frustrated that it took a pandemic to force healthcare providers to adapt and innovate. Maine is a very rural state. With data showing that most medical visits do not require in-person contact, he sees a lot of stress, time and money wasted in the last two decades because of resistance to tools of the future.

Now that telemedicine is here, and poised to stay a main component of care, Grossmann sees human connection and empathy between physicians and patients as the most important challenge.

“We've done digital health for the last fifteen, twenty years the wrong way. We have empowered the doctors with the devices, but it's all for billing and not for connecting and interacting with a patient better. Telemedicine, teleconferencing must become another tool in how we communicate and care. Once that is understood by everyone—the patients, the providers, the payers, the regulators—I think that telehealth will be fully embraced after this pandemic.”

The future Grossmann sees includes devices like the DUO, a handheld ECG and digital stethoscope, and the CORE digital stethoscope. He just expects them to continue to evolve rapidly, keeping pace with the ever-advancing technological field.

“The DUO has a great form, and I’m impressed how a patient at home could follow the instructions and do their own auscultation, and you can listen and see the ECG features. The new CORE design is almost ideal in what clinicians do day to day.”

In the future, he sees devices like these getting even smaller and more versatile. The disruptor in Grossmann has him calling for an overhaul of the electronic medical record system as well.

“It would be ideal to have a new EMR for the new century, where we can empower platforms like Eko, for example, to enter data without having to ask permission from the monster EMR companies.”

Grossmann envisions clinicians being able to focus on the patient without turning around to enter data in a computer. He sees a compassionate interaction taking place while a virtual human, off site, populates the patient’s chart and guides doctors and nurses if needed.

“You’re just looking at the patient,” Grossmann said. After all, that’s where the focus should be.
Learn more about Dr. Grossmann from his blog or follow him on Twitter @ ZGZR.