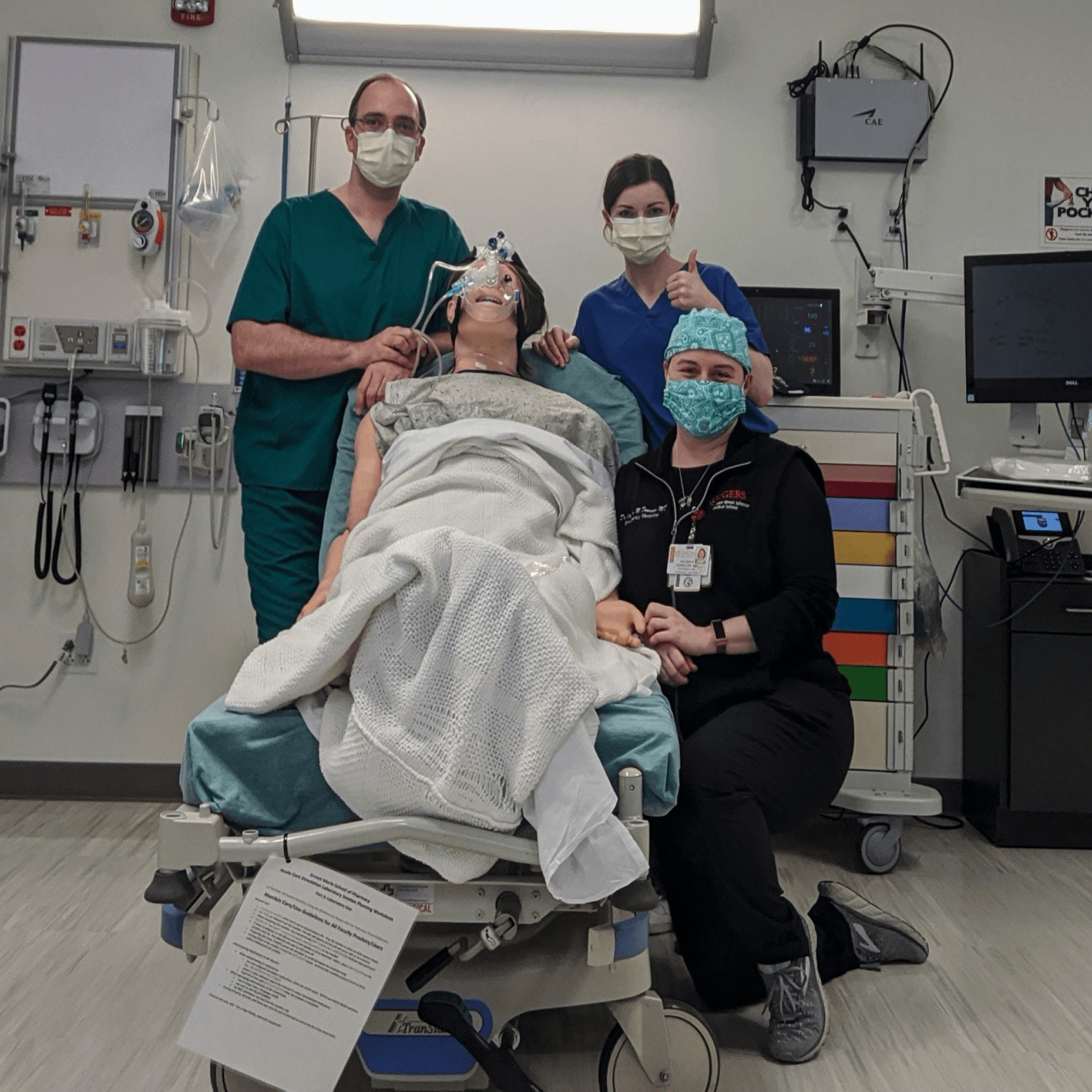 In the Spring of 2020, when COVID-19 was officially ruled a pandemic and life changed drastically for Americans, Dr. Colleen M. Donovan was in the middle of teaching Transition to Residency “Bootcamps” at Robert Wood Johnson Medical School. The Bootcamps are capstone experiences for 4th-year medical students poised to enter their intern year. Professors scrambled to come up with a solution to give students a culminating experience before graduation, but in a way that kept everyone safe. That very week, the university, like many across the country, had shut down.

“We almost had to cancel simulations. It took a lot of creativity, computers and the Eko CORE to help get students through this process,” Donovan said.

The solution Donovan ended up using relied on the Eko CORE to livestream vital sounds from a high-fidelity manikin, to students at home. The Ernest Mario School of Pharmacy Acute Care Simulation Lab was suddenly a virtual learning environment that operated a lot like a multiplayer online role-playing game (MMORPG).

“I was physically in the lab with two other people, and, essentially, we acted as Avatars,” Donovan explained. “Thanks to cameras that were set up around the room, students were able to see us from multiple angles. They were able to see the vital signs monitor. I provided the voice of the patient, which was actually our high-fidelity manikin.”

Once the patient started to feel unwell, the physical part of the challenge would start. Students needed to coach the clinician Avatar through the process of checking vital signs.

“That’s what was super helpful with the CORE,” said Donovan, who not only played the voice of the patient, but controlled the manikin’s exam findings and vital signs through the use of a computer console.

“Students hear the abnormal heart and lung sounds. They then have to come up with a hypothesis (aka differential diagnosis), a list of what they think the problem could be, then come up with a list of tests they would order. Then, in the middle of that list being created, the manikin goes into cardiac arrest and they have to coach how to do chest compressions, use the monitors, and resuscitate their patient,” explained Donovan.

The result wasn’t just that transition to Residency Bootcamps were able to successfully move forward. Students found the exercise pushed them to develop better communications skills and to internalize lessons from the practice situations they encountered. For one student in particular, the skills she honed in the virtual simulation lab soon translated to reality.

“I got an email from a student a few months later. She asked ‘remember that case we did in Bootcamp? I had that patient in real life,’” recounted Donovan. “She was able to take care of the person in a real emergency, because she remembered what she did in practice. That’s pretty much the whole point of simulation in the first place. One of the great things about Adult Educational Theory is that after you do something, the next time you’re confronted with something very similar in the future, you remember back to that last situation. Building those types of memories is key. When COVID happened, I was anxious for the students because I didn’t want them to miss out on this important experience.”

Donovan was able to quickly pivot to the CORE in the middle of the coronavirus crisis because she had already researched ways to limit her exposure as a practicing physician.

“I initially bought the device so I wouldn’t have to use a traditional stethoscope on someone who might have COVID. I could put the CORE into a glove, just like Eko’s video showed, and have my earbuds on. I didn’t have to take off all of my PPE to try to get the earpieces of the stethoscope in my ears. While using the Eko App, I stumbled across the ‘Live Stream’ tab. That’s where it started.”

In addition to helping virtualize Bootcamps, the CORE has been valuable in online lectures. Donovan teaches virtual classes of up to 180 students at a time. She is able to livestream sounds from a high-fidelity manikin to students, who work to figure out what they are hearing. She also has pre-recorded sounds from the Eko App embedded into her lecture slides to play, or to share with students.

“The feedback I got from some very excited students was that they could hear everything, they really like it, and are hoping to have more sounds in the future,” Donovan said.

As restrictions eased, Donovan relied on the CORE when guiding small groups of 3rd-year students through the simulation lab.

“What I tell them to do is bring their phones and their earbuds, and I can livestream sounds at the bedside. I show them what normal physiology sounds like, and then what wheezing or crackles sound like. We’re able to walk through the pathophysiology for each of those sounds and I can be sure that they’re hearing what I need them to hear, instead of just nodding their heads.”

Donovan is all about innovation in distance learning, with a healthy dose of fun. A big fan of interactive computer games, Donovan even decided to make a problem-solving game for medical students from scratch, using Zork as inspiration. It’s part Choose-Your-Own Adventure, and part Escape Room.

“I was able to embed sound clips I recorded on the Eko App into a survey software and make it into a game. The player chooses which way togo and that changes what happens to the patient. Some of the Escape Room locks are based on whether you are able to interpret heart sounds or lung sounds correctly,” she said.

The learning tools Donovan has developed come from a sense of urgency to give students the skills to deal with something Donovan herself struggled with when studying Emergency Medicine.

“When I was a resident, I found that one of the things that scared me the most was cardiac arrest, figuring out how to take care of somebody when you really only have less than ten minutes to make a difference. That was frightening,” Donovan relayed.

No matter how many books she read, videos she watched, or lectures she attended, nothing seemed to stem that anxiety.

She trained rigorously on the same kind of high-fidelity manikins she uses to teach with today. “These manikins can illustrate points so much better than a textbook or slide or video. Being able to physically practice is so valuable,” Donovan said.

Now, Donovan is in charge of simulation for the entire Robert Wood Johnson Medical School. She plans to keep using the Eko CORE to teach in a variety of capacities, even after the school returns to in-person classes.

“In Emergency Medicine you have to rely on what you hear immediately and the CORE is very helpful in teaching that,” she said.

Donovan is now working with colleagues to build a library of heart and lung sounds for teaching purposes.