Dr. Pali, an emergency medicine doctor looks for COVID-19 solutions to using his stethoscope with PPE and found the Eko CORE Attachment. 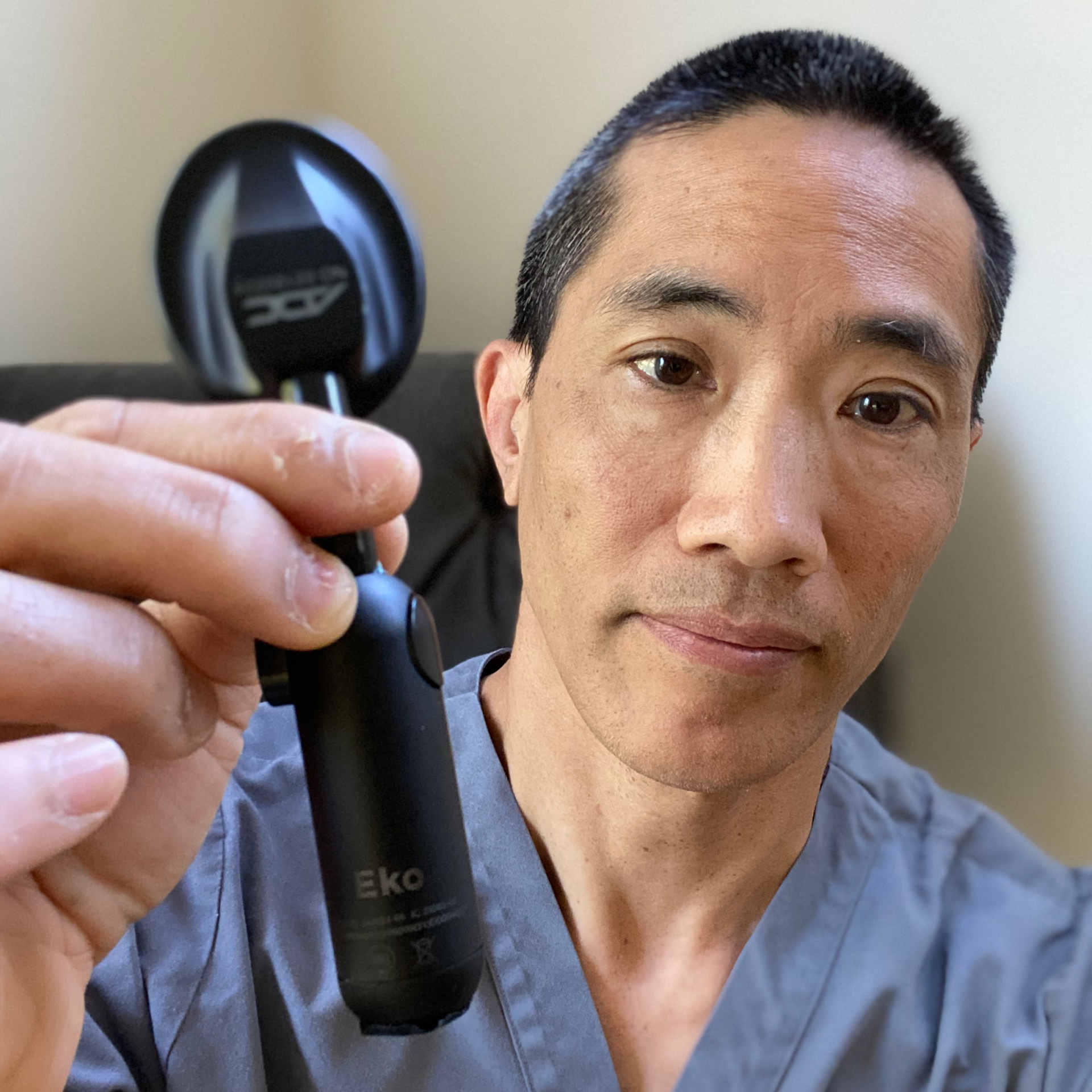 As soon as the first cases of COVID-19 hit California, Emergency Physician Michael Pali saw a big problem. Donning and doffing personal protective equipment without a mistake was hard enough, but it would be impossible to use a traditional stethoscope without reaching under his mask or visor, contaminating his face every time. He immediately went online and started researching solutions. He looked for days. A device that would let him auscultate in person, but without having to touch his face did not seem to exist.

Then he saw the Eko CORE Attachment on Instagram.

“I thought, oh my gosh, this could be great! I don’t even have to use the earpieces to auscultate.”

That’s exactly what Dr. Pali did. He attached the Eko CORE to his analog stethoscope's chestpiece and bought AirPods that sent the heart and lung sounds directly to his ears, using wireless technology. With the Eko app now able to run in the background, Dr. Pali’s CORE starts picking up sound the moment he turns it on.

“I put the AirPods on, turn on the Eko CORE, and keep my phone in my pocket. I introduce myself and let the patient know I’ll be listening to their heart and lungs with the CORE and hold it up. They think that’s pretty cool. It’s so much safer because I’m not touching my face to listen. I’m not touching my phone. It’s all in my ears.”
‍

Adaptation in the Frontline Fight
‍

As a physician in the San Francisco Bay Area, Dr. Pali was on the front lines of the fight against COVID-19 from the beginning. As the first cases reached California, even before international travel restrictions went into effect, his hospital was in overdrive, preparing. Then the handful of cases surged.

"At the end of February, beginning of March it was probably the worst I ever saw it", Pali said. "We didn’t know who was coming in who was COVID-19 positive or not. Our hospital, at the beginning, was hit the hardest. A couple of our staff members got it too. It was really stressful."

“You cannot hear. Not only are they terrible in quality, but they are a risk for you to actually use because you have to reach under your mask to put them on,” Pali explained. “Even if you saw a patient’s yellow stethoscope hanging by their bedside and it’s theirs, you’re not about to pick up that and put it in your ears.”

Dr. Pali wasn’t about to put himself at risk or settle for substandard exams. Instead, with the help of Eko, he adapted and innovated.

“There is no other solution or better solution than Eko. How else would you do it? The Eko is indispensable.”

Once he got his setup working perfectly, he shared the solution with friends and colleagues. A little peace of mind for frontline workers with the weight of the world on their shoulders.
‍

COVID-19 is testing the healthcare system like never before. It’s presented clinicians, administrators, and even the general public with unique challenges. Dr. Pali is acutely aware of a growing ethical challenge as well: the decision to forego an exam because of risk of exposure.

“That’s the thing that really doesn’t settle with me. We were always taught the patient comes first and now this is the reverse. We’re being treated like soldiers and of course none of us wants to die, but the patient has become secondary and that’s terrible. We are going to miss things.”

According to Dr. Pali whether to have contact with a patient is a dilemma that clinicians are faced with multiple times a day, but that no one is talking about. Each health worker must make that risk calculation for themselves. For Dr. Pali, the answer is always the same.

"I hate not seeing the patient. I know there’s a risk to myself, but I need to show the patient that there is a physician here that cares. As long as we slow down and don and doff correctly, we should be all right."‍

‍
The Dangers of Tunnel Vision

‍‍
In Dr. Pali’s particular hospital, about 10 percent of people who come in test positive for COVID-19. The seasoned Emergency Room physician points out that means 90 percent of people brave enough to come to the hospital during this crisis are suffering from something other than coronavirus.

He recalled a 14-year-old girl who came in with symptoms of the virus. Listening to the patient with the CORE, he heard bronchial breath sounds.

“They sound like Darth Vader—heavy, muffled breaths. And when you ask the patient to say ‘E’ it comes out as an ‘A.’ It’s called egophony, which means the soundwave changes because it’s conducting through solid water.”

Normally, Dr. Pali would have gotten her a portable chest X-ray. This early in the crisis, however, he had to do without.

“I couldn’t do it because in the middle of the night if you had a PUI, a Patient Under Investigation, they have to wash that machine and it takes one hour to clean. And that patient had to be set up in a negative pressure room to do the X-ray.”

Instead, Dr. Pali relied on his hunch that the girl had lower pneumonia. He started her on antibiotics and sent her home. As a precaution, he also ordered a COVID test, which came back negative. Later, his diagnosis was confirmed when the girl was able to get that X-ray. The patient could have gone untreated if she was interviewed over the phone or examined with a disposable stethoscope.

“You can’t hear bronchial breath sounds any other way,” Dr. Pali explained. “You have to put the stethoscope up and listen. Our job is to treat the patient but also to keep ourselves safe. And the Eko does both.”‍

Hospitals and clinics across the country are reporting an eerie emptiness, even as coronavirus cases continue to climb. Not only are COVID-19 suspects being directed into special units, but fear is keeping people suffering from other things at home.

“Now we’re getting people coming in with things like severe anxiety or depression. We have people who are finally scared about their health enough that they overcome their fear of coming to the hospital to see us. Then we have people coming with lights and sirens, crashing and burning. You have no time to do anything for them.”

The reality is hard to deal with professionally and emotionally. It’s part of why Dr. Pali has this reassurance for both the public, and colleagues who might not be as far along in their adaptation to the crisis:

“If there is any profession right now that can deal with this and adapt quickly, it’s emergency medicine. I’ve seen my colleagues come up with diagnoses and plans and protocols that work, so quickly. We were the first in line to see these people and we were ready to go in January.”

As a self-described “technology geek,” Dr. Pali says he will continue to find new ways to improve his practice, now, and after the crisis has ended.

“I will definitely use the CORE after this because it’s so small. I don’t have to carry a stethoscope around my neck. It’s a running joke that if you keep a stethoscope around your neck you’re going to lynch yourself at some point during your shift. The Eko paid for itself on the first day.”

During these uncertain times, it’s hard to look past the crisis, to a future that doesn’t involve case counts, death tolls, and test kit supply chains. But it’s a thought experiment Dr. Pali has experience with. He knows his actions today will weigh on his conscience tomorrow.

“After this is all done I’ll look back and think wow, that was a terrible time. But did I do everything I could to care for my patients? I can say yes.”‍