To nurses - thank you for your dedication, compassion, and resilience through a historic and challenging year.
May 5, 2021
•
7 minutes 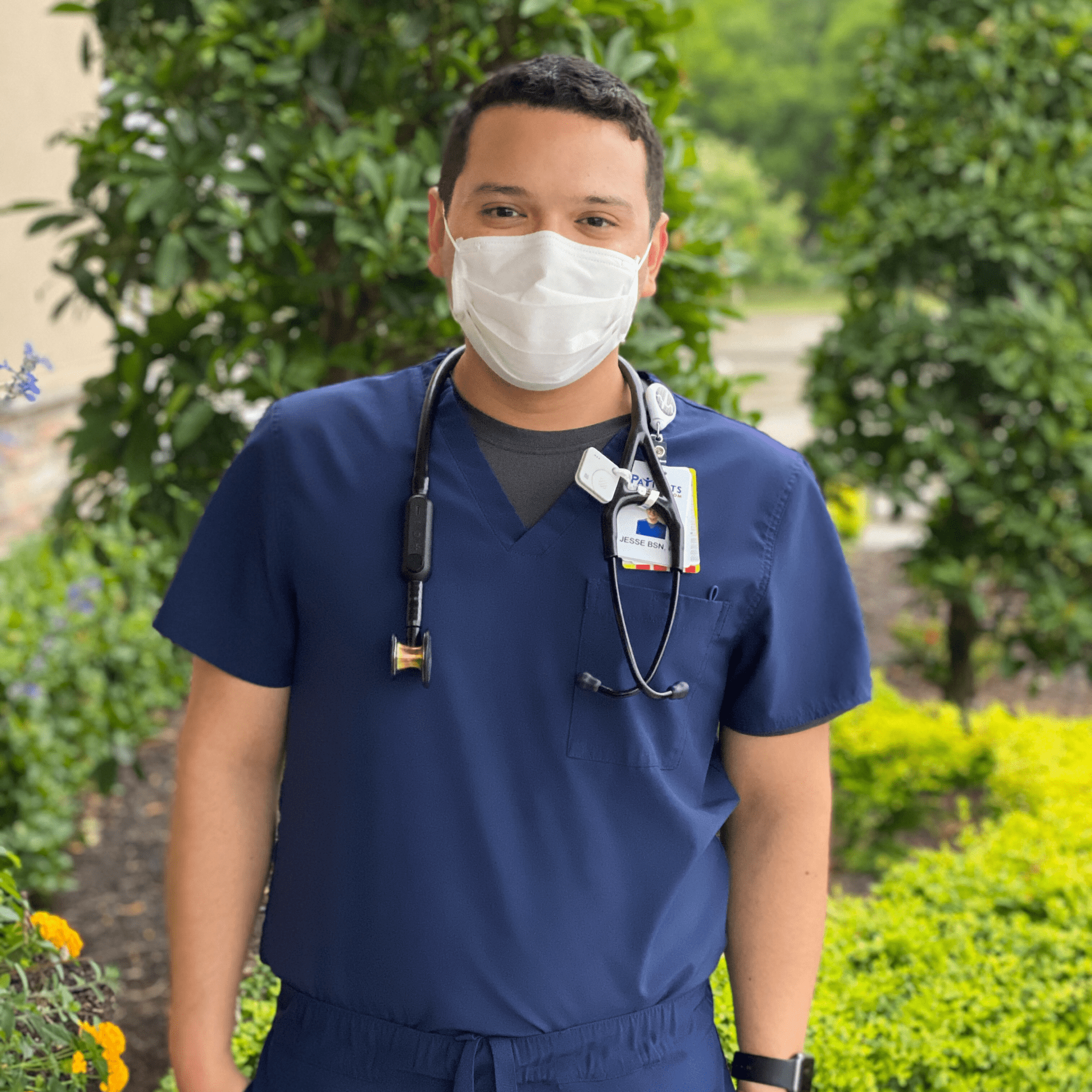 Over the past year, ICU Nurse Jesse Salinas has cared for hundreds of critically ill patients, including many fighting for their lives against COVID-19. Dressed in full PPE, he held phones up so COVID patients could speak with their loved ones. At excruciating times, he withdrew care, ending the suffering for a dying patient. Early in the pandemic, he contracted COVID-19 himself. Late in the pandemic, he lost his grandmother to the virus. For fourteen long months he saw going to work like going to war. But if he had it all to do over, he would do so in a heartbeat.

“It's such an amazing feeling to be there for people when they need it the most,” Salinas said. “A lot of people don’t think about how there are people on this planet that are struggling so much, fighting for every breath they take, and as a nurse you get to be there for them and their family.”

To be so positive and selfless after a historic wringer of a year is a testament to nursing dedication and grit. These incredible individuals have been riding an emotional roller coaster that has taken them into the depths of exhaustion and grief and to the heights of hard-fought recoveries. For Salinas, the memories are seared into his heart and his mind. Take his first two COVID patients.

“Twins that were COVID positive came into the emergency room. One of them had lost a pulse, but we got it back,” Salinas recalled. “They were identical twins so they looked exactly alike and they sounded alike. But they had very different reactions to COVID.”

One of the men had to be put on a ventilator and was struggling to stay alive. The other was doing better, but still needed a BIPAP mask to help him breathe.

“Unfortunately, one twin did not survive that night. It was so terrible to have to tell his brother,” Salinas said.

The heartbreak didn’t end there. As a nurse, he spent the next several nights caring for the surviving twin, getting to know not only him, but his family, who was restricted from visiting but desperate for information and a connection.

“When you have these patients for so long, you develop a relationship with them and their families. We got in the routine of around 10 o'clock at night, I would FaceTime his daughter so she could talk to her dad.”

The night before the funeral for his brother, the surviving twin woke up screaming and confused. Salinas rushed to don full PPE before the patient ripped off his BIPAP mask.

“He's screaming his brother's name, telling him not to go, not to go. He was a really strong guy and was able to push me away and get his mask off,” Salinas remembered, tears in his own eyes.

Things quickly deteriorated. The physician decided it was time to intubate the patient, a sign that often precedes a sobering outlook. Once intubated, many patients decline further. Salinas’s first thought was to call his daughter.

“I ran upstairs to grab my equipment. In the stairwell I FaceTimed his daughter and I told her I’m so sorry, we're going to have to intubate your Dad. She thanked me and asked if she could talk to him one more time. She got to speak to him for a couple seconds.”

A few days later, the daughter decided that it was time to withdraw care of her father. Two men — brothers, fathers, husbands, gone in a week. It hit Salinas hard because he recognized this was not an isolated case.

“To know all this was happening to hundreds of thousands of families all over the United States, all over the world, was so hard,” he said.

In the weeks and months that followed, the hospital’s tiny COVID ward quickly overflowed. The surge brought new patients every day. When Salinas describes the past year as a war, it’s in the sense that every patient represented a fight for life. Every shift began with a solemn walk past a newly acquired hospital semi-truck because the morgue was too small.

“It was wild. It was crazy, fighting to keep these patients off the ventilator and running in rooms when they would get hypoxic and confused. It became so difficult to get up and go to work. Just walking past that morgue truck on the way in, you know it’s going to be a terrible day,” Salinas said.

PPE became his soldier’s uniform in the battle for breath. An essential part of that uniform was a wireless stethoscope powered by the CORE® Attachment and AirPods, allowing Salinas to put his stethoscope in a sealed lab bag and hear the vital sounds through his PPE with minimal contact.

“I would do my assessment and keep it all under my hood so that I never had to remove PPE. COVID affects all parts of your body, but specifically the lungs, so a pulmonary assessment on these critical patients was just so important. The Eko stethoscope device became pivotal,” he said.

Salinas found himself relying on the app to record what he heard so that he could document while limiting his exposure. “If I had a question about something or was really unable to hear, I could save the sound on my phone and then go out of the room and document my assessment. With these patients I never wanted to stay in the room more than I needed to be.”

Salinas has been using Eko CORE technology since nursing school. In addition to relying on the active noise cancellation and sound amplification when he’s in a loud environment, he finds himself using the app frequently.

“I love being able to record sound and play it back for someone else. The way the app lets you see sound is just so incredible, Salinas said. “It’s also nice to go into the app and practice hearing what an actual murmur sounds like. I have not heard one in a while, and I like to keep fresh. The stethoscope is powerful in itself, but the app just brings a whole other layer of ability to the tool.”

There are more than four million registered nurses in the United States. With the health care system under a microscope the past year, the profession has been in the spotlight like never before. Salinas said part of what drives him, what keeps him loving what he does, is the outpouring of gratitude from the public.

“People are incredibly thankful, especially after COVID and it gives you this intrinsic value that no amount of money in the world could ever touch. I love learning, I love seeing that patient open their eyes for the first time in weeks and being able to tell them you were in an accident a week ago, but everyone's okay. It's humbling.”

With coronavirus case numbers headed down and vaccination rates headed up, Salinas is looking forward to a new step in his career. He’s aiming high— literally— training to become a flight nurse.

“Flying gives you access  not only to the patient but the care a lot faster,” he explained. “These nurses have been specially trained to do some things that physicians or residents would do in the hospital. It’s awe inspiring. They also get to round on the patients afterward and essentially see the fruits of their labor. That’s my long-term goal.”

His advice to those considering going into nursing is to be aware that there will be bad days. But the good days will help you power through the bad.

“Remember that everything you do affects someone's life, and it can be as innocuous as holding someone's hand as they're taking their last breath, but you have so much power in what you do. Don't take it for granted.”

Nurses Week 2021 is May 6 to May 12. If you run into one of these extraordinary people as life starts its slow shift back to “normal,” thank them from the bottom of your heart. Buy them a meal, a drink, an espresso. Usher them to the front of the line. Give them a rousing round of applause. They’ve played an integral role in the fight against COVID with immeasurable resilience and compassion. And as we emerge from the pandemic, they’ll continue to play one of the most important roles in healthcare for the foreseeable future. Eko salutes nurses today, and every day.