10% Off
Labor Day Sale — Ends September 6th
Shop Now →
Thank you! Use code HOLIDAY on your next order for all stethoscopes.
Oops! Something went wrong while submitting the form.
Resources
/
Newsroom 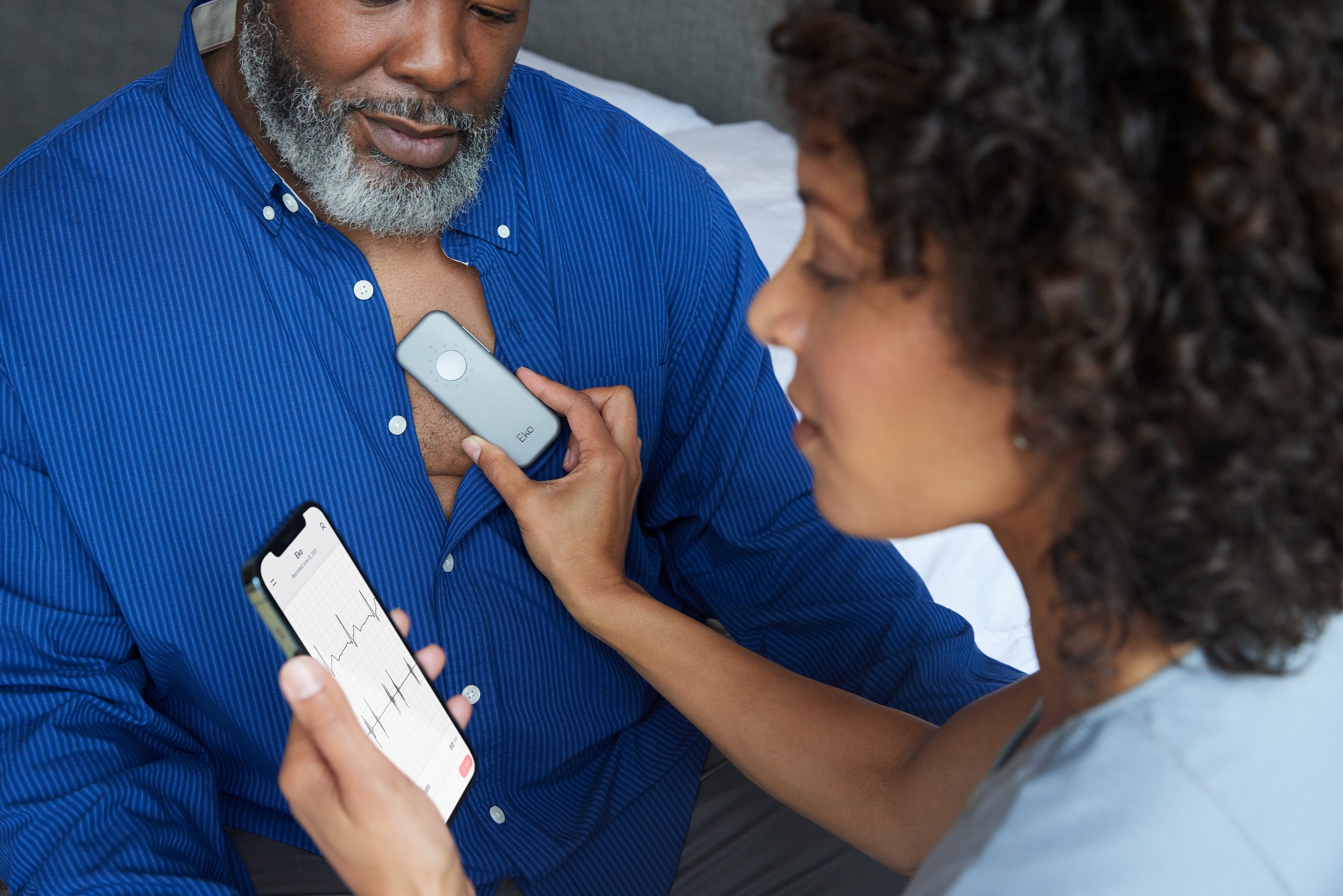 Eko, a digital health company advancing heart and lung disease detection, announced today that the Imperial College of London, in conjunction with the UK National Health Service (NHS), published a study(1) which highlights Eko’s ability to screen patients for heart failure in seconds with AI during physical exams.

Eko’s low ejection fraction algorithm (ELEFT) detects a weakened heart pump, which is present in about half of heart failure patients.(2) It was developed in collaboration with the Mayo Clinic and will be submitted to the FDA under “Breakthrough Designation” for formal review later this year.

“This tool allows healthcare professionals to reliably rule in or rule out heart failure at the point of care,” said Dr. Nicholas Peters, Professor of Cardiology, Imperial College London. “The result will be earlier diagnosis and treatment and the avoidance of unnecessary and expensive tests for those in whom heart failure is ruled out. This means better and more cost-effective healthcare. It’s a total game-changer."

According to the American Heart Association, 6 million American adults are estimated to have heart failure,(3) with 26 million people affected worldwide.(4) Diagnosis is a significant challenge given that heart failure symptoms are also associated with many other conditions and detection often requires a series of expensive tests. Using the Eko DUO ECG + Digital Stethoscope with ELEFT, heart failure caused by a weakened heart pump can be detected in seconds during a stethoscope exam.

“The superhuman capability to screen patients at any point of care, including before surgery, should challenge the unacceptable reality that 80% of patients with heart failure are currently diagnosed through an emergency hospital admission,” said Dr. Patrick Bachtiger, lead author and a clinical research fellow at the UK’s National Heart and Lung Institute. “The current clinical pathway simply misses too many patients, leaving them undiagnosed until very sick. This tool can save time and money and unlock major benefits for patients through early diagnosis and effective treatments."

In the study, the algorithm’s performance at detecting a weak heart pump was excellent compared to the current gold standard of echocardiography.​​ When 15-second recordings were taken with the DUO at one chest location, the algorithm was 81% accurate at identifying normal and impaired heart pumping function. Accuracy went up to 86% when two recording locations were used.

“This is a landmark study for multiple reasons,” said Dr. Adam Saltman, Chief Medical Officer at Eko. “The investigators showed that the low ejection fraction detection algorithm can quickly, easily, and effectively identify the patients who have impaired heart pumping function, even if those patients don’t yet have symptoms.”

About
Eko
Eko, a digital health company, is advancing how healthcare professionals detect and monitor heart and lung disease with its innovative suite of digital tools, patient and provider software, and AI-powered analysis. Its FDA-cleared platform is used by hundreds of thousands of healthcare professionals worldwide, allowing them to detect earlier and with higher accuracy, diagnose with more confidence, manage treatment effectively, and ultimately give their patients the best care possible. Eko is headquartered in Oakland, California, with over $125 million in funding from Highland Capital Partners, Questa Capital, Artis Ventures, DigiTx Partners, NTTVC, Morningside Technology Ventures Limited, Mayo Clinic, Sutter Health, and others.
Contact
Eko

Eko Team
Content & Press
press@ekohealth.com
Sign up for a Demo
A member of our team will respond with one business day.
Eko