10% Off
Labor Day Sale — Ends September 6th
Shop Now →
Thank you! Use code HOLIDAY on your next order for all stethoscopes.
Oops! Something went wrong while submitting the form.
Articles
/
Announcements 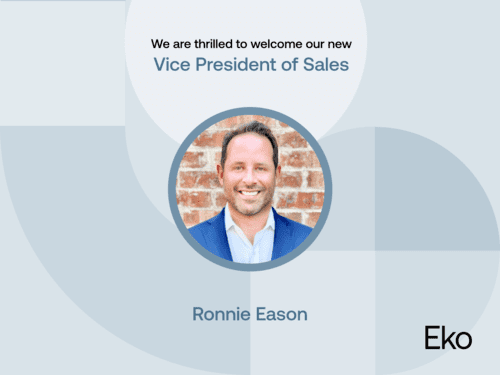 As VP of Sales, Ronnie will lead the company in building significant enterprise revenue growth. Namely, he will build out the enterprise sales function to launch and establish a market for Eko Murmur Analysis Software, a first-of-a-kind artificial intelligence-based detection tool for screening for valvular heart disease, including aortic stenosis.

“With Ronnie, Eko has a proven sales leader who has helped establish and grow disruptive medical technologies,” said Eric Davidson, President and Chief Operating Officer of Eko.  “Ronnie will help us do the same at Eko by delivering novel and powerful cardiopulmonary screening capabilities to frontline healthcare professionals and healthcare organizations.”

Ronnie joins Eko during a year of significant milestones. In January, the NHS published a landmark independent study validating Eko’s ability to screen patients for heart failure in seconds with AI during routine physical exams. The company was named one of the “10 most innovative medical device company of 2022” and was awarded a “World Changing Idea” by Fast Company. Additionally, Eko was recognized for AI Innovation in Healthcare and received FDA clearance for a machine learning algorithm (EMAS) that can identify and differentiate heart murmurs indicative of valvular heart disease.

“I’m incredibly excited to join the Eko team and expand the mission of providing exceptional cardiopulmonary care at every patient encounter,” said Ronnie Eason, Vice President of Sales at Eko. “As a former cardiac patient, I understand firsthand the importance of early detection and intervention. Our team is dedicated to providing the solutions that enable physicians, clinicians, and healthcare organizations to do just that.”

Looking for a career to put your heart into and join an Inc. Magazine “Best Workplaces”? Learn more about Eko’s open roles.